Image: Julien Belli
I spent the summer of my twenty-first year in England, serving an internship and living with an American couple. I didn’t know how to drive — still don’t — so they frequently drove me about. Granted, I could travel much of the country on my own thanks to a comprehensive public-transit system, but sometimes we traveled together.

It’s an adjustment for an American to get used to British roads, even as a passenger. First, you have to get in on the opposite side of the car from what you’re used to. And, if you’re a taller person like me, you have to fold yourself up to fit inside the smaller European cars. Then, once you’re out on the road, you endure the sensation that you’re about to be hit by a car. No matter how thoroughly you convince yourself that the British drive on the opposite side of the road from what you’re used to, you can’t shake the idea that you’re in the wrong lane and soon to die in an accident. It takes a week or two to adjust, and when you return to the States after two or three months, you go through it all over again, gripping the armrest for dear life.

Perhaps it’s fortunate that I was only ever a passenger, because I don’t think I could have ever mastered the intersections in England. I had never before seen a roundabout — this was well before they caught on in the United States. To whirl round in circles, figuring out what lane to be in to make your turnoff, always with the security that if you miss your turn, you can just circle round again, was a completely alien and nerve-wracking experience — yes, even as a passenger.

One day, the couple and I traveled to Birmingham for the day. On the way back, we passed through the most infamous interchange in the entire country. The couple said it was called “Spaghetti Junction,” and as I looked about me, road upon road, overpasses and underpasses interweaving, it was as if Kafka had maintained a secret life as a civil engineer and designed this monstrosity. 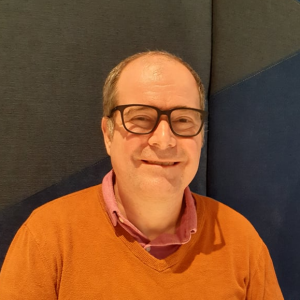 So I want you to think through the little narrative I just gave you, and then take a look at my unfortunately unphotogenic author headshot. I’m a fashionably dressed man of European descent. I look well fed and healthy. If you’re particularly observant, you might have noticed I have a bit of trouble with the drift of my left eye, but it’s not immediately obvious. My hair is thinning in front, in a manner commensurate with my age. If you had seen the photo first, it might not have surprised you for me to have written this story, for from this simple headshot, I fit most people’s preconception of someone who might have spent a summer college internship in England.

The truth, of course, is much more complicated than that. Though everything I wrote was true, I omitted some details. First off, this internship was not to help me through some high-powered degree in business or finance. In fact, I was a Bible-college student. I attended the school for many reasons, though a huge one was that I believed it would be cheaper than other schools, even state universities. My church offered me a scholarship if I attended a college within the denomination. Like most of the students at my alma mater, I was solidly lower-class and heavily dependent on student loans to finance my education. My disabled mother only had a seventh-grade education, and my near-illiterate father was a nonfactor in my life, so it was a challenge to get the advice I needed as I headed into life after high school. So I ended up in a college where the academic standards were at a high-school level. Intellectually, I was horribly matched for the school, but I had no idea. This was all I knew.

But you don’t get all that from just a headshot and a carefully crafted bit of memoir. You can’t see past those squinty eyes to my brain that muddles through a mishmash of anxiety and depression and PTSD to get through each day. These facts of my life are not obvious, the traits that make me an absolute mess behind the steering wheel, which is fine, since my disabilities have periodically impeded my employability such that I’ve never been able to afford an automobile in the first place. And unless you’re a sartorial specialist, you can’t tell that my shirt was bought on sale at the superstore. But it looks fashionable, so I must be gay, right? Are you going to go with that stereotype? Well, in this case you’d be right.

But even these extra details don’t explain the full story. I went to a Bible college, but I’m now an atheist, meaning that, according to many studies, I belong to the least-trusted group in America. And the extreme stress of my life as a closeted gay man in the evangelical church actually contributed to the development and persistence of my disabilities.

It all intersects. As a cisgender white male American, I embody a great deal of privilege. But as a lower-class disabled gay atheist, I also lose out on a lot of privilege. And it’s a weird place to live in. In my perception and experience, the former set of traits makes me the bane of the liberal, and the latter an anathema to conservatives.

In this column, I’ll write a lot about identity. It’s unlikely I’ll write much about current events. It’s not my forte; by the time I’ve solidified my thoughts on a big news story, it has fallen well out of the noxious 24-hour news cycle. But I will write a lot about my own life and experience, and I’ll occasionally interview people whose intersectionality is different from my own.

So I ask you to join me on this little journey as I explore what it means to be many different types of human being all at the same time. I’ll probably contradict and confuse myself. I’ll make mistakes. I’ll grasp at ideas bigger than my brain. But that’s what human beings do.