Image: Luke Mancini
My goldfish, two of them, died last week. These two, glittering, golden life-forms, John Fitzgerald ‘Jack’ and Kilgore Trout, are gone. I’m not particularly sad. They were only goldfish; but for some reason I’ve been trying to not think about them since they passed.

I woke up that morning, shaking off a hangover headache and found them when I went to feed them before I left for work. I found them drifted to the top of the tank, their eyes, fins, unmoving. They died, as I discovered some time later, from ingesting pieces of a seashell I’d brought home from vacation years ago, and added to their tank for ambiance. I’m only left to imagine that they died in agony. I feel guilty about that.

We met senior year of college. I was in the biology lab I’d pushed off taking. Jack and Kilgore were the subjects I was tasked with recording the respiration rates of as I raised and lowered the temperature of the water by one degree each way. I remembered watching Jack up close in my beaker, laying on my arms on the cold stone table top. He tread water, his mouth moving so organically, breathing, it almost looked like mine. This (then) tiny creature was as much alive as I was.

At the end of the lesson, I asked the adjunct professor with the cigarette wrinkles around her lips what would happen to the goldfish now. She explained they had too many of these feeder fish, and they weren’t expected to live long anyway. She implied, heavily they’d be flushed. I felt a spasm of fear clench in my chest and I ran to the café in the building and asked for a plastic bag. I took the two fish from my table, and poured them in, skipping my next class and ran back to my room and a plastic pitcher in which they’d live for a few hours until I could get to a pet store to spend my week’s booze money on a tank and some food. That night, I named the shiny orange one Jack, and the swarthier muted gold one, Kilgore Trout, chuckling at my literary cleverness. I like to think they were pleased when I, thinking I was the pinnacle of wittiness changed my twitter bio to: “Writer, Rescue Fish Owner.”

They entered at what almost felt knowingly as the right time. Just a few weeks later, I was hurled unceremoniously from my cradle of undergrad into the harsh realities of what my peers called “adult life.” I moved home, and back into my childhood bedroom, and the fish with me.

The fish watched me as I struggled to find a job and relieve my parents of the burden of my presence. They studied me, while I cried after the call came from the friendly HR manager at the independent school to tell me that while the team really loved me, that I’d made it through three rounds of interviews, they were going with another candidate. The fish watched as I finally got the job offer so I could move away from home and to Boston. They came along on moving day, sealed in their tank, buffered by rolled-up towels behind the passenger seat.

They never remarked or made fun of me as I discovered how blissfully unaware of such day-to-day minutiae I was, such as how to prepare food for myself, or how to parallel park. Completely alone, and without a safety net, I rented a chilly one-bedroom east of the city to start my adult life, but I wasn’t alone.

At one point, two years ago, they fought off an awful infection where they grew lethargic and lost their appetites, a thick film formed over their eyes. I don’t know if they ever regained their sight, or if they were permanently blind from it. They couldn’t tell me. I poured aquarium salt and measured medication into the tank, hoping they’d survive. While they were sick, I hurt with them, I couldn’t imagine a life without them, these impassive guardians, these perpetual watchmen, their judgment eternally withheld.

They watched as Lisa and I took those first serious steps of moving in together, and as I finished graduate school. They floated by as I put my head in my hands with rejections and celebrated publications. They often stayed up with me as I worked late into the night, or early in the morning. Their tank positioned just to the left of my desk. The little bookshelf they sat on is empty now.

In the dark, the night before I found them, I staggered in after midnight, nearly drunk. I walked past their tank, and hadn’t even thought to check on them, see if they were keeping cool in the warm summer night. I didn’t confirm they were still swimming back and forth, chasing each other around, or sleeping, as I should have been. They slept floating upright, still, one little fin moving to keep stability.

Finding them dead, I panicked, giving each of them a brief nudge, and feeling my heart leap when Kilgore’s fin moved, only to discover it was the water moving it, not his biology. These creatures that had weathered so much, had borne witness to my adulthood, had really gone.

We’ve been talking a lot about getting a dog lately. The idea of a big furry animal bounding at me when I come in the door is charming. I think I want that, but something doesn’t feel the same. It probably won’t be. A dog can snuggle you on your bad days and your good, sleep on your feet and take on the wide world with you. There’s an impartiality that’s gone with a dog. There’s no millimeter of glass behind which the dog observes you, and you him. The line between human and animal is blurred.

I took “rescue goldfish owner” off my bio on twitter yesterday. It says “writer,” alone there, now.

For three years, they watched me impassively, floated peacefully beside me as I moved about the world, theirs no larger than the area of the twenty-gallon tank. They floated by and watched, but I like to think with a sense of pride.

I remember the first real rush of gratitude and companionship I felt for these tiny sparkling animals. I was alone in that first apartment of mine, the drafty one, east of East Boston. I listened to the scratching and crackle in a bad recording of Sarah Vaughn in the darkness with a bottle of pinot noir on a Tuesday night. I looked to my left, and there they were, sleeping, Kilgore drifted, his little right fin making slow circles in the water. For however big and cold the world seemed, I wasn’t alone in it. I realized it had happened. I’d grown up. 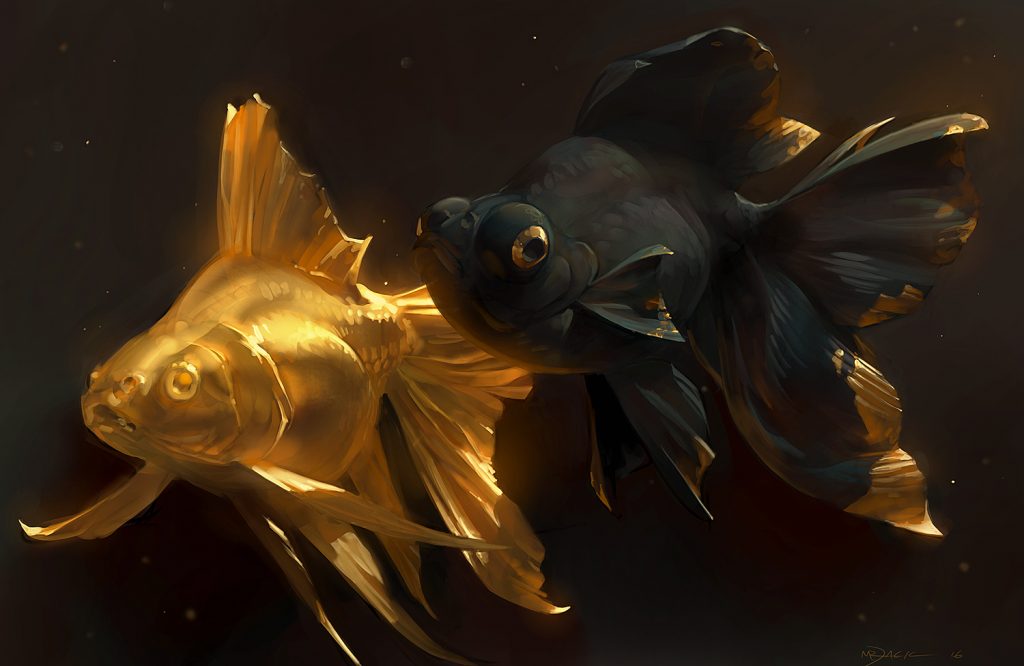 Nick Mancuso is a New England based fiction writer and essayist. His work has appeared in Foliate Oak Literary Journal, Quail Bell Magazine, Spry Literary Journal, The Literary Nest, and the Garbanzo Literary Journal among others. Nick holds a Master of Fine Arts degree in Creative Writing from Fairfield University and presently lives in Boston, Massachusetts.