Who wouldn’t love us when we floated
in motel-pool phosphorescence, lit up like bones
the flesh got soggy on, dropped off.
Dad makes the last bed, doffs his fedora full of feathers
he picked up off the interstate. Positively teeming.
He plays pool. I play a Rich Bitch sucking candies.
I leaf through Catcher in the Rye, am bored.
I almost pass out in the sauna.
I watch six hours of Kids in the Hall.
I go back to the pool. There’s nothing to eat
but a rich bitch doesn’t ever eat.
I loll. I stain. I soften.
When I come back to the real world I say
My dad couldn’t afford to feed us.
I say I almost passed out in the sauna.
I say Holden Caulfield is a phony.
Spit my gum out. Pour a drink, lean back
against the wall and laugh. The pool.
The feathers. Throw my dad under the bus
again and again until we both
come apart in your hands, the text
too swollen, stained with coffee grounds to read.

Down there everything was pink and yellow, precious,
everyone too lazy—cupping their combs,
lipping their cups, they’d lisped and slept,
Uriel and her sisters, and Maribel, watching the fatherless
drift of their hair like wires, the lyres
strung with hair, the clustered cockle-shells
on the surface-high harp. The singer, too, was precious:
insufferably twee, but maybe mermaids are, thought Maribel,
but snickering Uriel was hovering close,
her tail rolled up, her purple teeth
wine-grinning just like Maribel’s, and Maribel’s tail
(once the dead mother’s, Maribel had hips)
hung weird and slack at the thighs and pooled
loose at her ankles, but they both still hushed
at the same moment: suddenly the song
was real, hard, that was love,
the grit invisible inside the pearl.
The star-blue surface made them drunk,
well, drunker than they were, and in the corner
a guy from high school—Maribel’s—
was pasted like a postage stamp:
This all was paid for, Maribel
said, and on stage “to be”
the girl was trilling; on the beach
their princes oystered soundlessly.
The high-school guy was making eyes
and Maribel thought, don’t they know
that sometimes they’re between us?
Laughingly with Uriel
(“the one,” the girl sang) she approached
him, licked at his serrated edge,
they made a date, him, them, his friend,
an undersea café. What else could happen!
Girls who are submarine. Girls who sub
rosa could see anything, and the rose
as wide as the Pacific, and to rise
above it was to see the dawn that Rore
had told them all about, but drunk
and plunging under bedclothes in the dorm
they plumbed—what? caverns that the sun
can’t rise in, only bubbles. Falling, now,
asleep she thinks how glad—she would
she thinks, have given anything “to’ve seen” 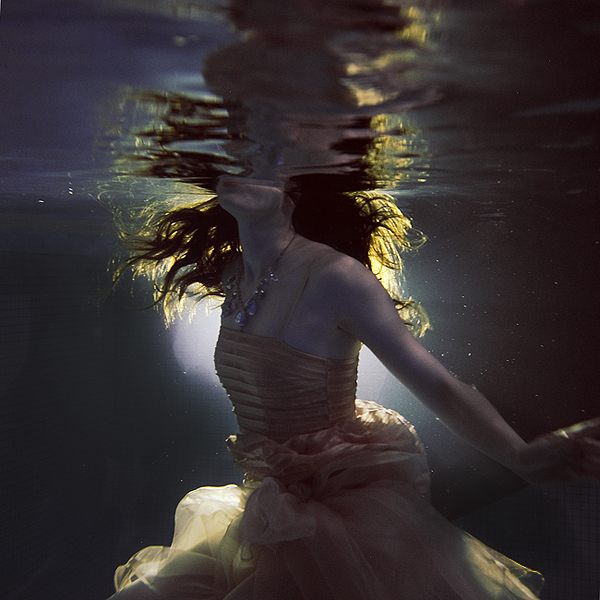 Caolan Madden holds an MFA from Johns Hopkins and is currently a PhD candidate in English literature at Rutgers, where she's working on a dissertation on the figure of the "poetess" in nineteenth- and twentieth-century poetry by women. Recent poems have appeared or are forthcoming in Bone Bouquet, Cartridge Lit, glitterMOB, Inferior Planets, Split Lip, Black Warrior Review, and Posit; her essays on literature and popular culture can be found online at weird-sister.com and in the forthcoming collections Electric Gurlesque (Saturnalia) and Essays on Women and Gender in Science Fiction and Fantasy (McFarland). She is the co-author of the collaborative chapbook Girl Talk Triptych (dancing girl press, 2016) and the author of the chapbook VAST NECROHOL, forthcoming in 2017 from Hyacinth Girl Press. She lives in Brooklyn with her husband and daughter.