“Like a Dry Sponge Looking for Water”: An Interview with Chelsey Zibell

Image: "Amiq" by Angela
Chelsey Zibell was raised in the village of Noorvik in northwest Alaska. She attended the University of Alaska Fairbanks as a UA Scholar and obtained a BA in English and Iñupiaq Eskimo. She is working on an MA/MFA in Poetry. Chelsey’s goal is to teach high school English (and hopefully Iñupiaq) in rural Alaska and develop a manuscript of poetry based around traditional Iñupiaq stories and what it means to have a biracial identity in Alaska Native culture. 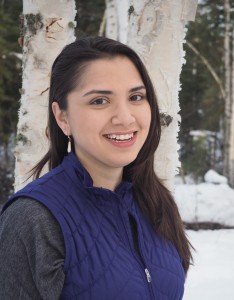 Last year, Chelsey worked with BBC Radio in translating portions of the script for the radio play Looking for Billy. In this interview, I discussed with Chelsey her work with the BBC, her role in relation to the Iñupiaq language, and the future of Alaska Native and Native American Languages.

How did you come to be associated with the project?
In May of 2015, I received a forward email from a friend who works in the Alaska Native Languages department. The email was from Isabella de Rosario, a production coordinator for BBC Radio, looking for North Alaska Iñupiaq speakers to do some translations and Iñupiaq English dialect for a radio play. After some consideration and a discussion with my Iñupiaq language mentor, I responded saying that I was interested in the project.

How was the experience of translating for a British audience different from an American audience?
My previous experience translating was mainly limited to translating texts into Iñupiaq. There was usually a speaking component, but for these assignments I could always fall back on the correctness of my writing. But this time, I was asked to translate specific dialogue and also to speak dialogue in an Iñupiaq English accent. In this case, my pronunciation was more important than the text (although I did send a word document with the translations). Since these were lines that were going to be performed by voice actors in the UK, I tried to pronounce the list of words as true to my accent as I could, while also pronouncing the differences as clearly as I could. But I did worry that I was over-exaggerating the accent.

How did your upbringing influence your desire to study Iñupiaq?
I grew up in a predominantly Iñupiaq community, and I am Iñupiaq myself. I heard it spoken by elders, I heard phrases spoken by adults, and us kids would use the words we knew. It was also incorporated into the school, although we never gained fluency. It was the lack of fluency that brought on my desire to learn Iñupiaq.

How would you describe your experience as an Iñupiaq major at the University of Alaska-Fairbanks?
I quickly became excited about the possibility of gaining fluency in my heritage language. I didn’t start as an Iñupiaq major, I was an English major from the start. But I took every Iñupiaq class that was available and realized after a few years that I could put those credits toward a double major.

I was like a dry sponge looking for water. I gathered as many books as I could find (and as many as I could afford). In the classes I took, I found the grammar book that is available for the language to be seriously lacking in many ways. Yes, it does cover the most important grammatical aspects of the language, but it is not visually appealing, it is a dry read and quite outdated. It was published in 1986. As far as I know, the most recent reprinting was in 2011 but the basic format of the text has remained the same.

With regard to language preservation, how do you perceive the role of universities, especially in the light of nationwide budget cuts?
The university was where I achieved fluency (or semi-fluency). It was the first time I took Iñupiaq classes that taught grammar rules, which is necessary for achieving fluency. It was the first time I learned how to construct sentences, instead of learning lists of words. UAF has been key in my own learning of the language and is currently the only university that has an Iñupiaq degree available.

It makes me very worried to think that native language programs might be cut from universities. These languages are vital to our understanding of the various Native cultures across the country.

What do you believe is the future of Iñupiaq, and how do you and your work play into that future?
Realistically, Iñupiaq is on the same track as the Eyak language, which currently has no living speakers. Most of the fluent population are elders and some middle aged adults. But I also see a growing number of young adults who want to learn the language and are working toward achieving fluency. If this continues, then language revival is definitely possible.

I believe that listening to elders speak, and listening to recordings of traditional stories is very important in acquiring Iñupiaq language. And I do have a desire to resurrect the old language. But if we want the language to thrive, then it needs to change. We have new technologies and concepts that need Iñupiaq words. How do we say “computer” in Iñupiaq? Someone came up with the word qakasaŋŋuaq, “imitation brain.” But how about words like “cell phone?” Or “congress?”

I was nervous about being a part of this play, “Looking for Billy.” What if it didn’t accurately represent the Iñupiaq people? But I decided that as a writer and a language learner, I needed to take risks. Yes, it’s scary What if I inadequately translated the lines for the BBC radio drama? What if I translate my poetry horribly? What if others don’t like what I’m doing with the language? However, I now fully acknowledge the need to take such risks if I, and others are going to revive the language. Actively using the language, such as translating for projects, is a part of this movement toward language revitalization.