Image: Rodney Paul Mayton
She lies on Friedrich’s ear. Her husband is asleep, breathing heavily, loud rumbling snores that echo from his chest. She kisses his helix, her pillow, curled under her head and wishes him, “Goodnight.” When he does not respond, she kisses him again, small bird pecks, before rolling on her back, her feet resting safely on his soft, fleshy ear lobe. This is the way they sleep now.

In the morning, he picks her up with his forefinger and his thumb, lowering her to the dining room table where he eats breakfast. He makes himself toast and baked beans, cutting a fingernail slice of bread topped with a kernel to serve her. She’s sitting at one end of his plate, her feet dangling off the porcelain edge. “Coffee?” he asks. “Yes, please,” she says. He holds up a teaspoon to her face and she sips the hot, milky liquid, warming her stomach. This is the way they eat now.

During the day, she is confined to their house, free to roam all the cabinets, shelves, and drawers. Things look different when you are two inches tall. On the walls, there are photos of Friedrich and her from their wedding. He looks sturdy and regal in his light blue suit, a color that highlights his dark, smiling eyes that once stared her up and down like a wild animal. Friedrich liked her skinny, so she went to the gym. Friedrich liked her dressed up, so she never went without makeup. Friedrich wanted her to be the mother of his children, so she tried to get pregnant. Keeping Friedrich happy made her happy, even though her friends and family had warned her otherwise. Let me make my mistakes, she thought. What do you know about my happiness?

Marriage is made up of concessions. She fed and bathed him when he was sick, and he was feeding and bathing her now that she turned small. Guilt keeps him to her like a magnet, dragging him closer to the ground. Perhaps it was guilt that shrank her. Now guilt folded over him to ring in punches, grip his head, and press him down.

On his bedside table, he has a multitude of books open about: pygmy genes, the Flores Man, Fitzgerald’s “The Curious Case of Benjamin Button,” Ballard’s “Mr. F is Mr. F,” the safety procedures of human growth hormone injections, the benefits of niacin and how it increases growth hormone levels, and numbers of the best orthopedic surgeons in the Bay Area. He vows to get her back. He never asked her if she liked normal. They were certainly past the realms of normal.

He comes home from work, exhausted, finding her naked, sitting cross-legged on the pillow. “How was your day?” she asks.

“Put some clothes on,” he says.

“Why don’t you come and kiss me then?”

Two months ago, they felt each other. Two months ago, they made love. His head, still full of black tiny curls, has now been left unpicked. His beard, unkempt, tells her that he would give up on himself before he gave up on them. He looks at her as if she was crazy, not because she’s the size of his thumb.

“I’d accidently take off your head if I tried.” And with that, he turns away and walks out of the door.

At night, she climbs down from his head and puts her cheek on his pubic bone. He lies still, but she knows he is awake. His snores soften to a hum, but he does not move out of fear of crushing her.

“Let’s try,” she whispers, stepping onto his thigh.

“No, this isn’t right—” He puts his hand in her way, a barricade she sees through. He tilts his head and eyes her cautiously as she slowly peels back his fingers.

“How’s it any different from before?” She wraps her arms around his penis, hugging close like a tree. “Why can’t it be like before?”

Tears rolled down the side of his face, pooling in his ear folds. “I can’t. It’s you. Look at us.”

She doesn’t miss a single pore in front of her, the wall of brown skin taut and smooth between her arms. Like his brown hair and his brown eyes, this is the Friedrich she loved. She wanted him to love her like he promised, when he stood in front of their friends and vowed to keep her. She loved him for taking care of her, but she loves him more for who he is. Kind, passive Friedrich. Gentle, gentle, Friedrich. Never leave me, Friedrich.

She returns him her attention and her loyalty. She keeps her arms around him, then goes with slow squats, moving her arms up and down. He lets out a little crack in between his moans, clearing his throat, as though he could pretend she was someone else but the skinny gym-going, well-dressed, would-be mother of his children. He had to love her simply because she loved him. Friedrich, she thought, married me. Now he gets to keep me. 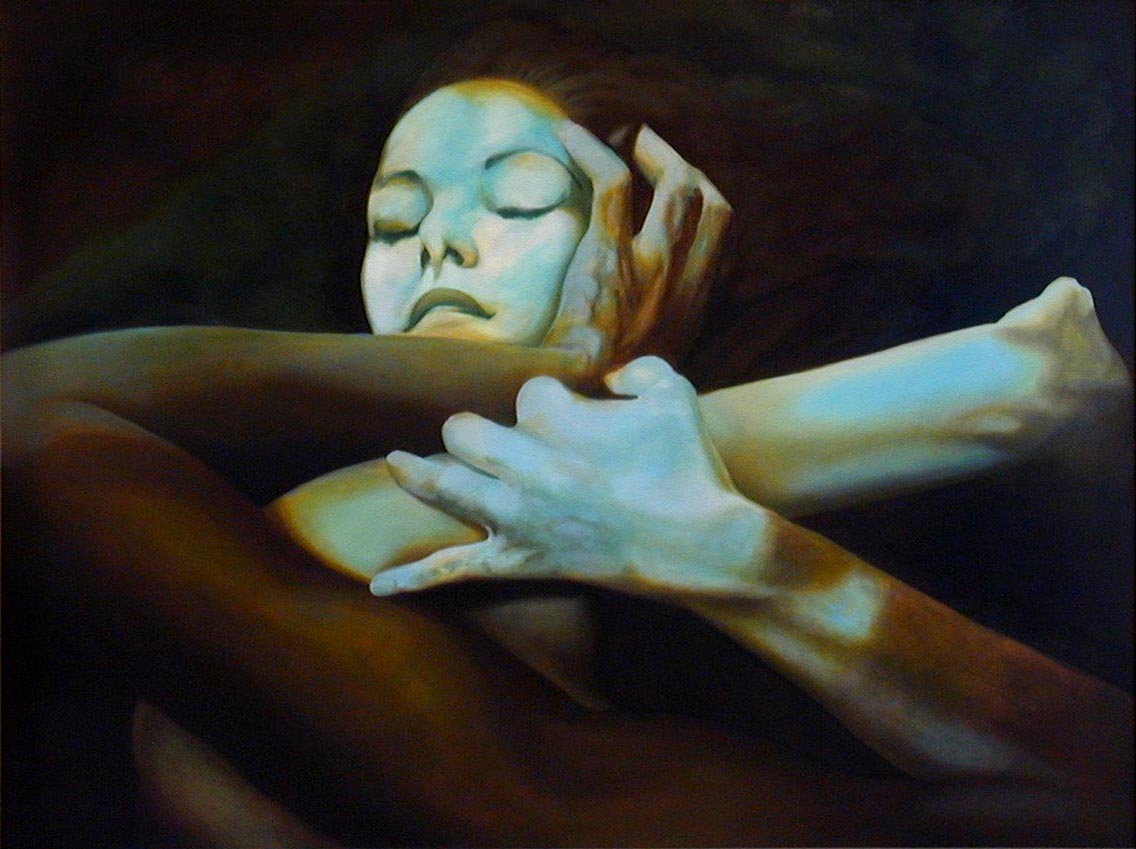 Ploi Pirapokin is a Thai-Chinese cyborg. Her work is featured and forthcoming in Tor.com, Apogee, Fiction International, The Bellingham Review, among others. She is working on a collection of short stories that add to Asian-futurism and blogs at ppirapokin.tumblr.com.