Image: Anna Dittmann
The Leaf Girl married in the fall, when her hair was mostly blood-rose red, but brown at the roots and yellow at the curled, arthritic ends. Most of the village came to the wedding in the forest, braving the dagger-pronged pine cones on the soles of their best shoes in order to see the ceremony. Leaf Girl had met her groom, a roamer with orange eyes, in spring, when her hair was pageboy short and a pale, beer-foam yellow. By the time of the wedding it had grown its longest and the last of the bright, sour green had just faded. The village people snickered at the romance, watching the roamer and Leaf Girl walk side-by-side through the streets. What would happen, they wondered, when he saw her in winter?

A flutter of leaves fell from the branches above as Leaf Girl and her husband walked down the aisle, arm in arm.

As the weeks of October and November passed, the Leaf Girl’s hair was seeped of its color and coiled in on itself. Leaf Girl was always beautiful, but it was this time, when her locks were light mauve and curly, that the men in the village thought her prettiest. They would pick up leaves from the forest and along their routes to work, then press them in their Bibles and present them to Leaf Girl at church on Sunday. If she liked the leaf enough, she’d give them a peck on the cheek. The town was full of similar episodes this time of year, as familiar to the residents as a lighted tree at Christmas: wives hitting their hunched husbands as the men moved through the streets with downcast eyes, trucks pulling over so the driver would open his door to examine a particularly colorful tree.

But the year Leaf Girl got married, the men became shy and cautious. Leaf Girl was a wife now, and they couldn’t look to warm their cheeks with the lips of another man’s wife. For weeks, Leaf Girl left church empty-handed. The church resounded with the cracks and snaps of untouched leaves, placed last year in the pages of the lesser used and duller books (Leviticus, Nehemiah), as the men paged through, searching for verses.

A few weeks after Leaf Girl’s marriage to the roamer, Arthur Leopold walked up the aisle after church, a bouquet bright maple leaves, colored by fall in shades of candy apple, candle flame, and sun tan, clutched between his palms. The leaves were as old as a decade and young as new-fallen. For every year of his marriage he’d pressed a leaf and saved it, hoping one day to get a kiss from the beautiful woman with the dendritic hair. His wife was jealous and red-faced, and he dared not do it while she was alive. But she’d died the previous winter, and he was tired of waiting. Before the service, he’d told Stuart Napper and Horace Fasy that he’d gone long enough without his chance at a kiss. And so down the aisle he strode toward Leaf Girl, who was gathering her jacket, and her husband, the roamer, who greeted Arthur with his arms wide open, like a little boy trying to catch a high-thrown ball.

“Here,” Arthur said, shoving the bouquet at Leaf Girl and ignoring the roamer. Leaf Girl caught his gift in her fingers and the parchment-thick leaves brushed against her flaking skin. She smiled, and turned to show her husband. “Beautiful,” she said, and the roamer nodded and smiled back. Leaf Girl pecked Arthur’s cheek, and the roamer patted his arm.

The next Sunday, every man in church, including the pastor, brought their leaves, some fresh-plucked, green and crisp; others fragile, brittle and brown, and the roamer and Leaf Girl smiled. Leaf Girl sewed the leaves together to use as curtains and lit the rest into beautiful fires in her backyard, which gave off rainbow-colored smoke.

As the days pressed on toward winter, Leaf Girl grew wan. Her skin paled to the delicate, icy, see-through blue of snow, and her hair whitened and fell out. The men put their extra leaves in different books, car repair manuals and Christmas-gift novels, and stuck those books under wobbly table legs and beneath stacks of long-empty suitcases, to save the leaves for next year. They missed her beauty, her hair the color of a glass of iceless scotch, and the men stared long winter nights into their glasses lamenting their loss; though they knew it would return again, come spring. Mourning Leaf Girl was the ritual that introduced winter, and their wives’ jaws slowly unclenched.

It was during this time, in the first weeks of December, that Leaf Girl’s husband, was seen walking down the town streets, mumbling to himself and onlookers and waving his arms. The men and their wives pitied the man his wife’s extremes, but after too many interrupted walks to take their children to school or to get to work they became annoyed. The fool saw her in spring, summer and fall, could he not have predicted her winter state, too?

The roamer bought soup and electric blankets and dozens of pairs of mittens and socks, though by this time Leaf Girl had shriveled so much that she fit only into child’s sizes. He piled the electric blankets under and above her and installed a second generator to support them. He hired workmen to install more outlets around the bed. She was thin, so thin, and so he fed her hot bread and soup and only let her drink boiling water. If he kissed her thin, white, puckered finger he would have tasted the wildness of a blizzard and felt the cool moisture of ice on his lips.

“I’ll warm you,” he said over and over, though she hadn’t spoken in days.

His desperate care for her continued into January, and the men from whom the roamer bought soup and blankets and electricity were all very pleased. They saw many profitable winters ahead with this stupid man and his phoenix fairy wife.

But then one day, the roamer opened his eyes and saw that Leaf Girl’s eyes were open as well. He was lying with his hands wrapped around her waist, facing her on his side, and he had not woken in the night from cold, which emanated from her body, but rather heat, from the blankets. She blinked, and the roamer began to cry.

Every day after that Leaf Girl grew stronger and greener. Her hair began to sprout in green, baby-soft buds, and though the weather was still cold, so did the trees and bushes and yards around the town. The townspeople, but for the soup maker and the blanket-seller and electrician, were happy: their town would no longer be doomed to death and rebirth. They were free to enjoy the cool grass on their feet or the beauty of a leaf-lined street all year.

The roamer and Leaf Girl began going to church again, and though it was only February, her cheeks already flushed pale and bright as the pink-clematis. Farmers saw their fields line with persistent, crisp new crops.

By March the flora had entered its summer, though the town woke to freezer-burned windows each morning and lay down each night to wintery chills. The crops had matured too quickly, and the farmers scrambled to hire more hands to help them harvest, but most of the food rotted into the earth.

With May came the advent of fall, when the trees once again shook free of their, shackling leaves and bore themselves naked to the world. The crops wilted, despite the warmer weather, and Leaf Girl’s hair glowed ember-red. No men brought her leaves for her autumn, except the roamer, who tucked them into the hundreds of books he stole out of the library dumpster, old, peeling things that smelled of mold but stacked well and pressed the leaves quickly.

June was wintery again. The trees shivered and the leaves on the ground dried and withered. The new crop seeds had not grown, and the lawns of the town were hay-hard and cow-pie brown. Leaf Girl grew ill again, but worse this time. The roamer nursed her again, pressing his red ear to her face every few moments to reassure himself that small squeaks and tissue-paper breaths still issued from between her lips.

He didn’t have to wait long this time. Within days, Leaf Girl awoke to rear in the spring. This time, the seasons cycled within a few weeks, and then a few days, and finally they began to filter through every few moments. It was like watching the life of the Earth on fast-forward: buds poked out from branches and dirt, grew large, turned color, and died, all within the span of a greeting or farewell. The farmers hadn’t time to pick more than two ears of corn or dig up a single potato before the plants died again. They were half-formed things too, yellow toddlers still wrapped in the unsoiled swaddling cloth of root balls and fledgling husks. They tasted bitter and smoky, and the harvesters, who’d spent hours plucking a few malnourished fruits and then waiting for another cycle, threw most of the crop away.

By August, the seasons had whittled down to little more than a few seconds. The trees and flowers and hedges began to shrivel and die: unable to exist in a state of winter, summer, fall and spring at once, they chose, rightly, to disappear. The town turned brown, the wind blowing up clouds of sand and rust-colored dust, the cremated remains of the plants and trees and weeds.

Leaf Girl, too, died, and the roamer swept, with the sides of his palms, her pellety remains off the electric blankets and into a glass jar. He buried it in the dirty, dry yard, and stuck a few plastic flowers at the head to serve as her gravestone. No one saw him walk out of town, because no one was watching.

The town had become a community of roamers. Many families deserted their homes and left for other, greener cities and villages. A few stayed, and for the rest of their powdery lives would find, upon opening their books, pages filled and dirtied by pressed leaves. 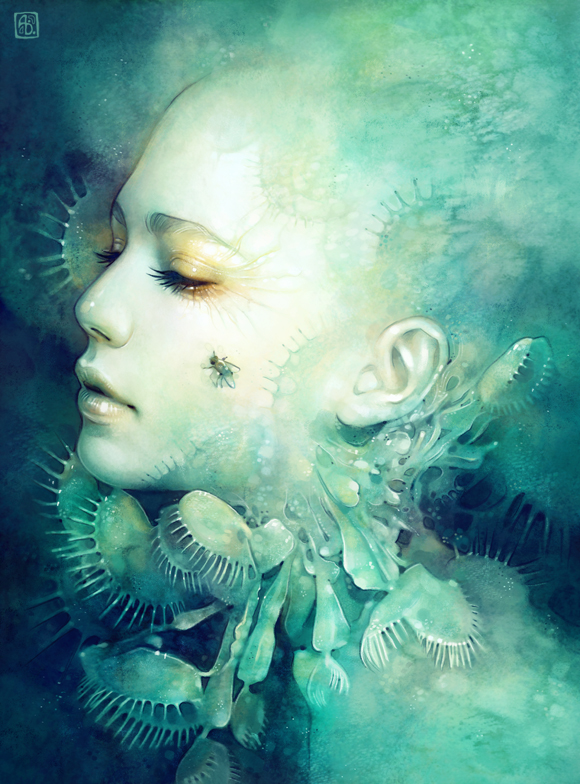 Elizabeth Pearl is a journalist and fiction writer living in Indianapolis. This is her first published story.